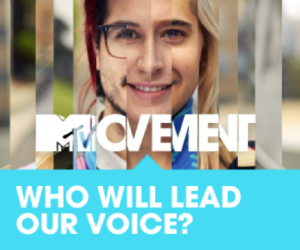 Did you know the millennial generation (also known as the GenY born between 1982 – 2003) represents 30% of the entire Australian population not only that but the Millennial generation also accounts for a staggering 46% of the 1.2 million Australians who have not enrolled to vote. With this in mind MTV and the Museum of Australian Democracy at Eureka (M.A.D.E) have launched a national campaign and have been on the hunt for the Millennial Leader… They are looking for someone to be the voice of Australia’s largest generation.

The Collabforge team thrive off projects dependent on scalable collaboration, so when we heard about this new campaign it was a natural step to get involved. We provided collaboration design services to help ensure the large group of stakeholders involved were able to get and stay on the same page. We also contributed substantively to the development of the project concept with MTV and M.A.D.E.

MOVEMENT aims to highlight issues that matter to young people, show how many potential leaders are out there and to lead social action to improve the future of Australia. The campaign provides a platform for the views of many, and for one person to be elected as the Millennial Leader of Australia’s largest generation, born between 1982 and 2003.