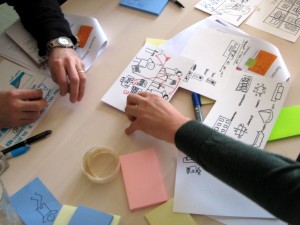 Dave describes Gamestorming as “a holistic collaboration approach that makes it possible for everyone in the organization to participate in creative and design-oriented activities. Whether it’s planning a meeting, generating ideas, understanding customers, creating prototypes, or making better decisions, Gamestorming is a way for groups to “work better together.”

As a Gamestorming fan and general facilitation geek, John found the workshop to be a really fun, memorable and professionally valuable experience. Not only did they learn first-hand about Gamestorming theory and practice, but they got to pick Dave’s brain generally about game design and facilitation techniques and activities.

Within Collabforge we have our very own gaming-for-collaboration expert though, in Strategy Lead, Hailey Cooperrider. Hailey has been researching the intersection of collaborative strategy making (and in particular scenario modelling) and role-playing/storytelling games. Her thesis topic is “how might we use role playing games to make strategy making capability more broadly accessible”. We interviewed Hailey to find out more about her research and what she’s learned through application.

So Hailey, tell us about the story of the research you’ve been doing on gaming?
It has two beginnings.

Firstly collaborating on making strategy is a big part of what we do at Collabforge. Making it more inclusive and making these processes more accessible for people who are not necessarily ‘strategic’ in their perspective and their work.

I realised that a lot of the tools used by D&D players to create heroes and worlds were very similar to the way we create strategies – heroic stories about the future we’re trying to create.

My intuition was that a game format like D&D could make strategy co-creation more accessible. D&D became a global phenomenon before the internet and yet it’s a very complex game.

So in a sense the story began with: what if we could adapt this game which millions of people use to bring the power of collaborative strategy-making to more people.

Why has D&D become such a phenomenon and lasted so long?
There’s a lot in that question! The history of D&D goes back to the history of tabletop strategy wargames. Through the mid 20th century a culture developed in the US of simulating warfare through games. Common patterns emerged around creating different figurines, taking turns to enact strategies, and using dice to throw some randomness into the game. This community of players were not only active in playing but also creating new games. This culture was able to sustain itself through newsletters and magazines.

Rather than being a purely competitive war game, D&D is more collaborative – bands of players working together. It’s also so powerful because you really identify with your character and this keeps people playing. It’s more role-play rather than simulation and it taps into the emotional level of characters.

Tell us a bit about how you’ve gone about your research
A lot of my research is about trying to make explicit my intuitive leaps.

I’ve had the opportunity to do a series of action-learning trials in the course of my work here at Collabforge.

I’ve also done a lot of desktop research on game case studies and heaps of research into strategy making generally such as the RAND corporation in the US. I’m focussed on defining a generic framework for how strategy works fundamentally and how it can then be collaborative.

An exciting discovery from my research is a game called ‘Microscope’. It’s about creating epic histories using collaborative storytelling that is ‘fractal’ in nature.

Where to next?
More time and funding to continue the research. My research focus is really different than how most people think about gamification – it’s about collaboration and storytelling, not assigning points to individual achievements.

I’m curious to hear from anyone who has any great games or game case studies especially as it applies to strategy and collaboration. I’m also keen to get in touch with anyone who wants to try applying these ideas to making strategies in the real world.

You can read more about Hailey’s ideas, research and inspirations on how role-playing games can be used to support organisations and communities in democratic decision making and collaboration at her blog.