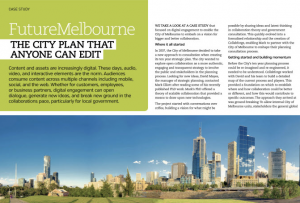 FutureMelbourne, one of our founding projects, has recently been featured in this publication from Local Government Professionals Australia. We are excited to see this historic project shared with a fresh audience, especially given the City of Melbourne has just launched FutureMelbourne 2026, an engagement process which will refresh the plan through community-generated ideas and insights.

FutureMelbourne enabled the City of Melbourne to use online co-creation for bigger and better collaboration – specifically in relation to collaboratively drafting a new city plan. The project took place in 2007 when David Mayes contacted our founder and Managing Director, Mark Elliott, after discovering his recently published PhD research. Mr Mayes was looking for fresh ideas on how to deeply and genuinely involve the public and stakeholders in the planning process, and thought Mark’s approach to collaboration could hold the key.

The project they developed, “a city plan that anyone could edit”, represented a world first and has generated a great deal of ongoing interest for both Collabforge and the City of Melbourne. The results spoke for themselves with the project winning the Planning Institute of Australia’s prestigious President’s Award, and with the plan being re-ratified four years later by an opposition incoming government.

You can read the full case study write up as part of the publication here.

For more resources on FutureMelbourne, see: